In Astral Sorcery mod, shooting stars will appear randomly in the middle of the night in Minecraft. These still begin from the moon and slowly travel in a downwards arch towards the ground. If they hit the ground, then they will explode much like TNT. If you want to gather the loot these shooting stars drop, you will have to follow the star on foot and flying will be easier for you. If you are not fast enough, the star will land but there will be no loot. 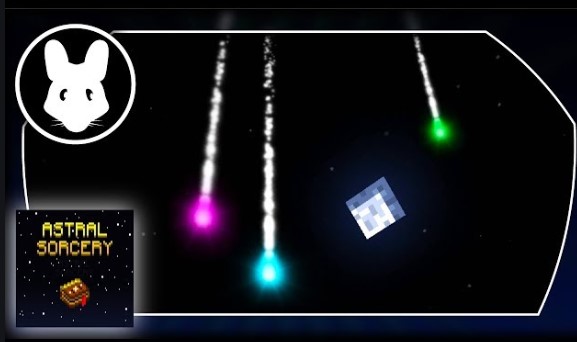 You are also able to find a Shining Casing among all of the loot. The Casings contain a Lucent Scroll which is able to be right clicked. If you right clicked it, you will be able to either gain knowledge about a certain aspect of Astral Sorcery or a new constellation. The constellations are able to be found in the sky and drawn out. They are unlike normal constellations because they will disappear. However, they will give you more knowledge about Astral Sorcery.

On February 12th, 2017, Astral Sorcery was first released in Beta for Minecraft version 1.10.2 by HellFirePvP. Do you know what mod it is? This mod is mainly focused at night. However, it does not mean that you are not able to progress with the mod during the day. Astral Sorcery mod is based very much around finding stuff in the world. Before you begin this mod, it is very recommended for you to be able to install a mapping mod such as Journey Map to make tracking a little easier.

Do you want to use this mod for Minecraft? If you want to use this mod, you are able to download it. Where can we download it? You are able to download it in the CurseForge. If you access the CurseForge site now, you are able to see that this mod has been downloaded more than 22 million times. There you will also see some important notes about this mod. First, if you deal with some issues or crashes, you are able to report them on the issue tracker if the issues were not reported yet. Second, if you use Auto GUI scale, it is not encouraged as there might be scaling issues. Third, sponge or other server software is not supported. Fourth, shaders or other Optifine’s features are known to cause graphical issues.