Angle of Vengeance Minecraft is the name of a mod that was created by Tamaized. This one is mostly focused on providing players with healing and anti-undead spells. Abilities are divided into three classes: Healer (mainly support class), Caster (mainly attack class), and Defender (mainly physical class, adds dodging).

As you can guess from the name, the purpose of the Healer is to heal. The Caster is known as the offensive spell casting mage which uses the light based spells to destroy undead. The Defender is your like tank, they get a dodge mechanic where attacks have an opportunity to not land at all on them. Aside from that, defenders also get advantages while having a shield equipped. 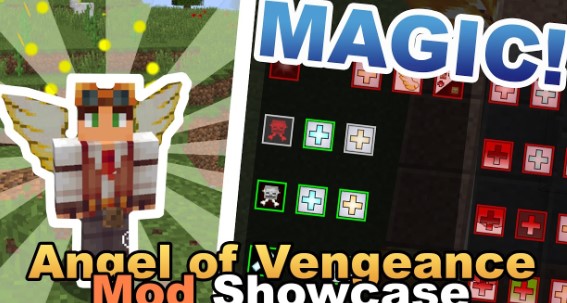 As stated before, you need to make sure you have already installed Minecraft Forge and TamModized. For those who do not have any idea of them, here is the explanation. Minecraft Forge can be described as a base mod that is used to run mods on. As the most well-known and widely used mod loader, this one is always up-to-date and gets a lot of attention from the community of modder. Please follow these steps if you want to install it. First, download the Forge installer. Second, right click Forge installer, Run as Administrator and press OK to install Forge. Third, open Start on the desktop. Fourth, open Run. Fifth, type %appdata% into Run and press Enter. Sixth, go to Roaming/.minecraft/mods. Seventh, put the mod you want to install into the mods folder and then Run Minecraft.

TamModized is known as a library of shared code used by most mods of Tamaized. Aside from Angel of Vengeance, some other mods such as VoidCraft and Beat Down Stick also use this. This one is actually pretty useless on its own. The library does indeed do one thing, upon the Ender Dragons second and further deaths, the dragon drops another Dragon Egg where it died.

To install TamModized, make sure you have already installed the Minecraft Forge. Then, locate the Minecraft application folder. Next, place the mod you have just downloaded (.jar file) into the Mods folder. After launching Minecraft and launching the mods button, you should now see the mod is installed.