Several Minecraft mobs are weak or immune to certain kinds of damage. Sea creatures, such as turtles, take more damage from tridents which are enchanted with Impaling. ‌While Skeletons and their variants are immune to drowning.

All undead mobs are healed by the potions of harming, however get extra damage from the weapons enchanted with Smite. Lots of those weaknesses and immunities are a result of what category of mobs that the mob falls into. Please see below. 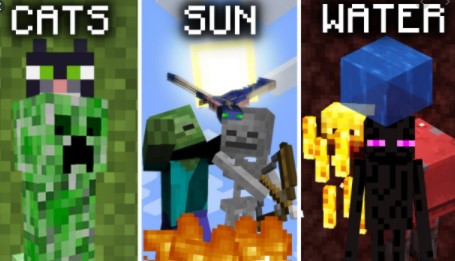 Under the effect of a Potion of Fire Resistance, these undead mobs still catch fire in direct sunlight but do not take damage. All undead mobs except for phantom, drowned,and wither sink in water. All undead mobs take extra damage from the weapons enchanted with Smite, and are ignored by withers. Most undead mobs have the ability to pick up the items. Some are able to spawn wearing armor, or holding weapons or tools.

This group of mobs includes squid, guardians, dolphins, elder guardians, turtles, salmon, pufferfish, cod, and tropical fish. They take extra damage from tridents enchanted with Impaling, ‌and do not cause pufferfish to inflate nor take damage from them. All water mobs except dolphins are immune to drowning, and all except turtles, guardians, and elder guardians take suffocation damage if out of water for too long. For your information, water mobs have the ability to swim, whereas other.

This group consists of mobs based on arthropods, namely spiders, cave spiders, bees, endermites,and silverfish. They take extra damage and get the Slowness IV effect once attacked with weapons enchanted with Bane of Arthropods. You have to know that both types of the spider are immune to the effects ofdrug. While Silverfish infest infested blocks.

This group includes illusioners, evokers, pillagers, vindicators, and ravagers. They are immune to evoker fangs damage and ignored by vindicators called Johnny. They are hostile to the players, wandering traders, iron golems and villagers. Witches and vexes can accompany them in raids. Illusioners are able to see the players or targets through blocks. Vindicators called Johnny attack ravagers, as they are not illagers.

Well, the text above is a classification of mobs; Weaknesses and immunities. If you want to get more information related to all Minecraft mobs weaknesses, you are able to search that information by visiting the page of mobs on Wiki. Aside from that, you are also able to read other articles on our sites. In addition, you are able to join the forum of community to share, discuss and ask anything related to Minecraft such as all Minecraft mobs weaknesses.